A”Super” Typhoon  with 150 MPH sustained winds heading for Fukushima the crippled nuclear power plant.   Fukushima nuclear power faces its second typhoon in October, according to the weather agency.   The crippled Fukushima nuclear plant is not fully prepared for the heavy rain and winds of a typhoon bearing down on Japan, the plant’s raising the risk of further radiation leaks if storms thrash exposed pools of uranium fuel rods or tanks holding contaminated water.

This section Copied from: www.conspiracy-cafe.com

This present course will allow us to see how the storm may be altered to hit Fukushima directly. It is well within the capabilities of technology to steer storms. The NWO is looking for an extinction level event to wreak havoc upon the Earth. Guchol means spice.

Typhoon Guchol from another estimated track

To add insult to injury, this is a one two punch. There is another tropical storm forming in the South China Sea. This storm will most likely trail Guchol. If they join, what then? The storm is called Talim. In Urdu it means education or learning. In the production of rugs it refers to the description of the number of pile knots and their colours. 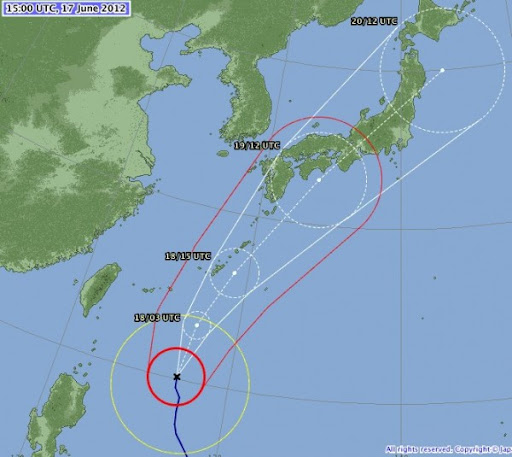 This section copied from : http://www.bloomberg.com

“Uranium spent fuel pools of No. 3 and No. 4 reactors are currently naked,” Kazuhiko Kudo, a research professor of nuclear engineering at Kyushu University, said on June 5. “A tornado with winds of 100 meters per second like the one that hit Tsukuba could suck up the pool water,” exposing the fuel rods. He raised the concern during a meeting assessing safety measures at the crippled plant in May, he said.

As dismantling and decommissioning the reactors will take decades, Tepco should review the plant’s safety measures against not only aftershocks and tsunamis but also tornadoes and huge typhoons, even if the possibility of extreme phenomena are very low, said Kudo, one of 12 members of the advisory panel to the Nuclear and Industrial Safety Agency, or NISA.

Hydrogen explosions blew off the roofs and walls of reactor buildings at the Fukushima Dai-Ichi station after the March 11 quake and tsunami disrupted power and cooling systems. There are 1,535 spent fuel rods in the cooling pool of reactor building four. Without cooling water the rods would heat up and start releasing radioactive material into the atmosphere

This section Copied from: wikipedia.org

A Typhoon is a mature Tropical Cyclone that develops in the northwestern part of the Pacific Ocean between 180° and 100°E. This region is referred to as the northwest Pacific basin.[1] For organizational purposes, the northern Pacific Ocean is divided into three regions: the eastern (North America to 140°W), central (140°W to 180°), and western (180° to 100°E). Identical phenomena in the eastern north Pacific are called hurricanes, with tropical cyclones moving into the western Pacific re-designated as typhoons. The Regional Specialized Meteorological Center (RSMC) for tropical cyclone forecasts is in Japan, with other tropical cyclone warning centers for the northwest Pacific in Honolulu (the Joint Typhoon Warning Center), the Philippines, and Hong Kong. While the RSMC names each system, the main name list itself is coordinated amongst 18 countries, including the United States, who have territories threatened by typhoons each year. The Philippines uses their own naming list for systems which approach the country.

Within the northwestern Pacific there are no official typhoon seasons as tropical cyclones form throughout the year. Like any tropical cyclone, there are six main requirements for typhoon formation and development: sufficiently warm sea surface temperatures, atmospheric instability, high humidity in the lower to middle levels of the troposphere, enough Coriolis force to develop a low pressure center, a pre-existing low level focus or disturbance, and low vertical wind shear. The majority of storms form between June and November whilst tropical cyclone formation is at a minimum between December and May. On average, the northwestern Pacific features the most numerous and intense tropical cyclones globally. Like other basins, they are steered by the subtropical ridge towards the west or northwest, with some systems recurving near and east of Japan. The Philippines receive a brunt of the landfalls, with China and Japan being impacted slightly less. Some of the deadliest typhoons in history have struck China. Southern China has the longest record of typhoon impacts for the region, with a thousand year sample via documents within their archives. Taiwan has received the wettest known typhoon on record for the northwest Pacific tropical cyclone basin.