Learn more about renting and buying

An international naval coalition becomes the world’s last hope for survival as they engage a hostile alien force in this epic action-adventure. Stars Taylor Kitsch and Liam Neeson. 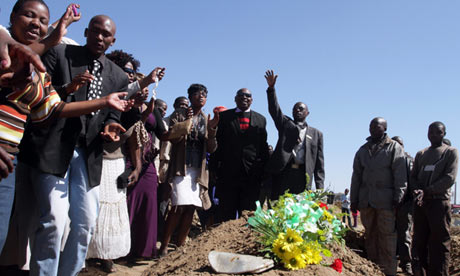 South African prosecutors have provisionally withdrawn murder charges against 270 miners who had been accused of killing 34 striking colleagues shot dead by police, but said they could be recharged when investigations are complete.

Public anger had been mounting at the charges, made under an apartheid-era law under which the miners were deemed to have had a “common purpose” in the murder of their co-workers.

The police killing of the strikers last month at the Marikana mine, run by platinum producer Lonmin , was the worst such security incident since the end of white rule in 1994, and recalled scenes of state brutality from that era.

“Final charges will only be made once all investigations have been completed. The murder charges against the current 270 suspects will be formally withdrawn provisionally in court,” Nomgcobo Jiba, the acting national director of prosecutions, said in a televised news conference.

The Obama administration’s aggressive, full-scale whitewashing of the “war on terror” crimes committed by Bush officials is now complete. Thursday, Attorney General Eric Holder announced the closing without charges of the only two cases under investigation relating to the US torture program: one that resulted in the 2002 death of an Afghan detainee at a secret CIA prison near Kabul, and the other the 2003 death of an Iraqi citizen while in CIA custody at Abu Ghraib. This decision, says the New York Times Friday, “eliminat[es] the last possibility that any criminal charges will be brought as a result of the brutal interrogations carried out by the CIA”.

To see what a farce this is, it is worthwhile briefly to review the timeline of how Obama officials acted to shield Bush torturers from all accountability. During his 2008 campaign for president, Obama…

The National Academy of Science would like to see the eco-fascist view of man-made climate change be taught in school curriculum to indoctrinate future generations to unscientific ideas like the Arctic sea-ice melting is not a natural event.

Alarmists are reporting that the Arctic sea ice has shrunk to 1.58 million square miles and expected to continue to melt.

Ted Scambos, US National Snow and Ice Data Center (NSIDC) scientist, claims that this melting can be directly blamed on man-made emissions of greenhouse gases (CO2).

Slushie conditions at the Arctic are being facilitated by “crushed ice and that is a lot easier to melt and melt more quickly”, asserted Walt Meier, researcher for NISDC at a press conference last week.

Sea-ice grows and retreats with the seasons. It is completely normal for sea-ice to melt, as it will reform and freeze over in…

The future is now.

In 2008 the Washington Post published an article titled “Washington’s Future, a History.” The article used the insight of two panels of experts who looked into the future 17 years from 2008. The Post’s article is a “fictional” account of a future Washington D.C. in which “small scale” terror attacks and angry rioters plague the streets and implantable ID chips allow government workers to pass through checkpoints.

Many of the scenarios depicted were foreseen by the alternative media and other well informed researchers well before the Washington Post. It didn’t take a crystal ball or otherworldly powers to discern what was coming. Government white papers and open statements foreshadowed plans for the construction of a surveillance society, a rising police state, and the implementation of martial law as globalization and economic collapse destroyed America.

COMMENT: Compare the friendly and feasible tone pushing for the adoption of this dangerous approach with the real agenda behind those stumping for the technologies implementation. As filmmaker Michael J. Murphy exposes in the interview below and his latest film ‘WHY in the World Are They Spraying,’ (On DVD at Infowars.com) geo-engineers are spraying the earth knowing that it causes or heightens drought conditions for some of the world’s poorest, while GMO seed companies are waiting in the wings with a “solution”– genetically-engineered crops designed to withstand droughts, resistant aluminum and other particles being sprayed into the atmosphere via geoengineering and much more…

A cost analysis of the technologies needed to transport materials into the stratosphere to reduce the amount of sunlight hitting Earth and therefore reduce the effects of global climate change has shown that they are both feasible and affordable.

The Real Reverse Robin Hood: Ben Bernanke And His Merry Band Of Thieves

Away from the stifling media crush, staid Ben Bernanke is dashing Reverse Robin Hood, lackey pawn of the Neofeudalist Financial Lords who shamelessly steals from the poor to give to the parasitic super-rich.

Please answer the following questions before launching a rousing defense of the All-Powerful Fed and its chairman:

1. What is the nominal yield on your savings account, thanks to the Fed’s zero-interest rate policy (ZIRP)? (Answer: 0.25%)

Iran would take action if US attacked Syria |

Iran would take action if the United States were to carry out an act of “stupidity” and attack Syria, an Iranian military official was quoted as saying on Saturday, but the comments later disappeared from the state-linked agency website.

Iran has steadfastly supported Syrian President Bashar Assad in his bid to suppress an uprising which both Tehran and Damascus see as a proxy war by Israel and Western states to extend their influence in the Middle East.

“If America were to attack Syria, Iran along with Syria’s allies will take action, which would amount to a fiasco for America,” Mohammad Ali Assoudi, the deputy for culture and propaganda of the Islamic Revolutionary Guard Corps (IRGC), was quoted as saying.

Assoudi’s comments were first carried by the government-linked news agency Young Journalists’ Club but were later apparently taken down from the group’s website. The comments were…

Esmaili said that the maneuver will include all of the Iranian army’s air defense systems, as well as Iranian air force fighter jets, and the Iranian Revolutionary Guard Corps, Iranian state news agency Press TV reported.

According to Press TV, “one of the initiatives in the drill will be… preparing the air defense personnel for the management of crisis.”

Reuters quoted Esmaili telling Iranian newspaper Hamshahri on Friday, ”Today our systems are prepared in a serious way for modern air threats, such that the performance of the systems compared to the previous profile has improved.”

1. The bewildered herd is lost in the maze of small details, while the doctors of reality construct mental traps and dead-ends in order to contain the conversation of contested political events and issues within the parameters of the U.S.-Israeli counter-terrorism paradigm.

The political conversation about the Bin Laden raid, a key event in the counter-terrorism paradigm, is based on a government-created conspiracy theory. People argue about the nitty-gritty details of the raid as if it actually happened in the real world. Since May 1, 2011, numerous versions of the infamous raid has come out, each one contradicting the other.

Instead of asking if the raid is real, political commentators and columnists are debating about which version of the raid is true. In effect, they are conspiracy theorists, something that they accuse 9/11 truth-tellers of because they can’t handle the truth.