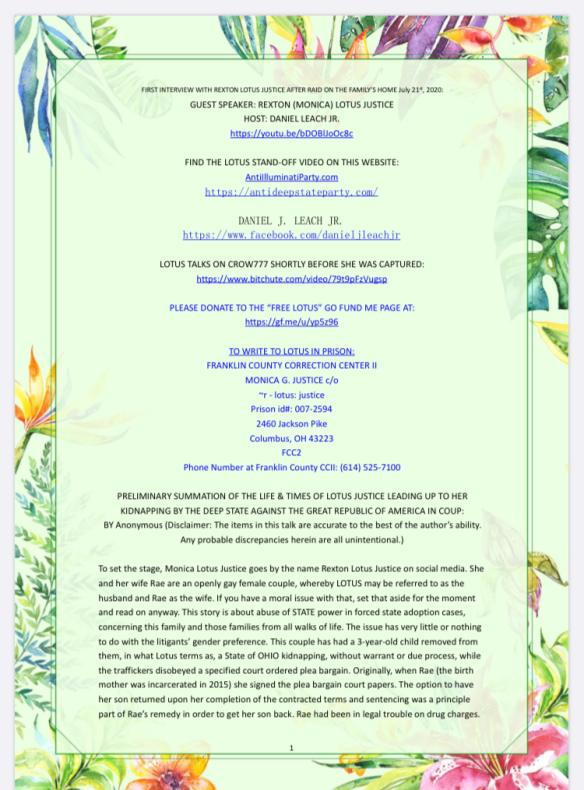 To read the compleat above PDF Click here :FIRST INTERVIEW WITH REXTON LOTUS JUSTICE AFTER RAID ON FAMILY’S HOME description below.

FIRST INTERVIEW WITH REXTON LOTUS JUSTICE AFTER RAID ON THE FAMILY’S HOME July 21
st, 2020: GUEST SPEAKER: REXTON (MONICA) LOTUS JUSTICE
HOST: DANIEL LEACH JR. https://youtu.be/bDOBlJoOc8c
FIND THE LOTUS STAND-OFF VIDEO ON THIS WEBSITE:
AntiIlluminatiParty.com
https://antideepstateparty.com/
DANIEL J. LEACH JR.
https://www.facebook.com/danieljleachjr
LOTUS TALKS ON CROW777 SHORTLY BEFORE SHE WAS CAPTURED:
https://www.bitchute.com/video/79t9pFzVugsp
PLEASE DONATE TO THE “FREE LOTUS” GO FUND ME PAGE AT:
https://gf.me/u/yp5z96
TO WRITE TO LOTUS IN PRISON:
FRANKLIN COUNTY CORRECTION CENTER II
MONICA G. JUSTICE c/o
~r – lotus: justice
Prison id#: 007-2594
2460 Jackson Pike
Columbus, OH 43223
FCC2
Phone Number at Franklin County CCII: (614) 525-7100
PRELIMINARY SUMMATION OF THE LIFE & TIMES OF LOTUS JUSTICE LEADING UP TO HER
KIDNAPPING BY THE DEEP STATE AGAINST THE GREAT REPUBLIC OF AMERICA IN COUP:
BY Anonymous (Disclaimer: The items in this talk are accurate to the best of the author’s ability. Any probable discrepancies herein are all unintentional.)

First Interview With Rea Justice Wife of Rexton Lotus Justice after Raid on the family’s home.

All of that evidence you uncover please forward to OhioAssembly@protonmail.com

Visitors will want to know who is on the other side of the page Rexton Lotus Justice please keep in mind this activist/researcher is sitting in a mental ward against her will, Her attempts to protect herself against forced intrusion was met with deadly force.

The way to get started is to quit talking and begin doing.

It is our choices, Harry, that show what we truly are, far more than our abilities.

Don’t cry because it’s over, smile because it happened.

HOW TO FILE A COMPLAINT AGAINST A JUDGE

Join a complaint Case number 2020 CR A 010576 blitz in an effort to prevent several corrupt Ohio judges along with the County District Attorney from ever practicing law again. Now the Ohio State Commission on Judicial Conduct (www.acluohio.org) website. We are recommending that people call them directly at Phone: 614-461-0256, or toll-free at Toll Free: 800-589-5256 , ask them to mail you a complaint form directly in order to avoid the very technical difficulties we are experiencing with the website now. Paper forms are always better than electronic ones, and we are seeing why with the blocking of any electronic complaint forms at a time when it is essential that we complain as much as possible. Filing these lawful complaints  will ensure that  Franklin County Probate Court, Robert G. Montgomery, corrupt actions will not cause the suffering in the future that was inflicted upon Rexton Lotus Justice . They are hoping we have short memories. We must follow through. Please participate in the complaint blitz by referring to the previous post. , which will provide more detailed information regarding a Rexton Lotus Justice! Follow us at CourtroomWatch.com and the AntiDeepStateParty.com.

Filing a Complaint against an Ohio Judge

How to file the complaint:

Federal judges are held to a similar standard as state judges. The Code of Conduct for United States Judges can be found here.

To send a written attorney complaint form by mail (if you prefer to use the webform instead, it’s below the preview of this print form):

This is what your looking for: Click to Down PDF file

Wow. More to come. Looks like offline is just as compelling.

, what hospital she’s in or what jail she is at, message me. Her wife Rae Roll was absconded as well and is in state custody. They both are. Where are they? Calling the Franklin County Police Department will get us no where. We’re told they cannot give out any information.

2 Comments
Like
Lorie Cole
3h  ·
Damn Columbus, Ohio is up to alot of Domestic Violence lately. Keep your eye on
Rexton Lotus Justice

who was kidnapped yesterday by Columbus LEO. She has been exposing Ohio human-sex trafficking going on there, that implicates the military and LEO involved in trafficking kids.

This is how they SILENCE People, speaking the TRUTH. They will have the Judicial Courts conspire with Dr.’s, Attorneys and LEO and even some family members to make u look CRAZY, so they lock u away. Because u are exposing their EVIL DEEDS. It’s going to take We the People UNITING against those FORCING their FOREIGN Jurisdiction on us from Foreign Law, coming out of the 4th Pillar BAR ASSOCIATION and the 5th Pillar SHARIA LAW.

My Facebook name is Jennifer Feldman Monroe.ive been friends with rexton lotus justice for some years now. I cried and have been sick to my stomach all day. I would like to tell  my story. Rexton lotus justice was trying to have me 1st on her list with a break through of these criminals involved with child trafficking. It would be easier for me to speak to you on the phone  thank you for all you are doing.
https://www.blogtalkradio.com/anti-illuminati-party/2020/07/22/rexton-lotus-justice-was-helping-fight-involved-with-child-trafficking

has been live during standoff where she was shot. She has been exposing #Epstein Ohio links to sex trafficking.

is known for attempting to #PinkSlip anyone who reports crimes.  Franklin County Probate Court, Robert G. Montgomery, Judge appears to have signed one such document, but we cannot find it on the docket. Furthermore, since when does #SWAT team deliver these?

Most Relevant is selected, so some comments may have been filtered out.
Write a comment…
She’s a “civic nationalist,” which is an untenable position, however this is one of the clearest descriptions of our situation and it teaches the exact remedy in law. I don’t expect to find a better offering on how to restore ou…
https://www.bitchute.com/video/4OepH0OLBUWe/?fbclid=IwAR36scCcKxTnl7RNr-T_DvBreadrw_gZDOPcJQZDhss7mePFf7USoJQ3PqU 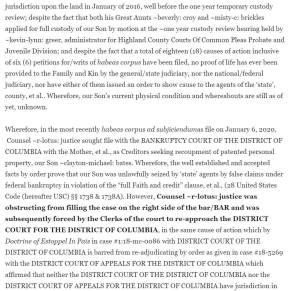